I’m always intrigued by the power of “the crowd” and curious about what sorts of projects get widespread crowd support. Maps seem to be high on the list — see projects like OpenStreetMap and Google’s North Korea mapping project. For historic maps, the Georeferencer Project from the British Library seems to be getting a lot of support: “The last time the British Library undertook such a project the response from the public was remarkable, with 708 maps completed in less than one week” (“Crowdsourcing the Past“, via InfoDocket).

For the curious, georeferencing is necessary because not only is the world not flat, it’s not perfectly round. Most maps and images of terrestrial features are flat, however, and figuring out how to make them round again is an interesting problem.  My brother did a neat project over a year ago in which he wrote some code to allow people to create three-dimensional planets using images processed for cylindrical projection for NOAA’s Science on a Sphere project. Ross’ project took those projections and converted them to printable cut-and-fold images that you can assembly into icosohedra (20-sided objects), close enough to spheres that you get the idea. In other words, you go from: 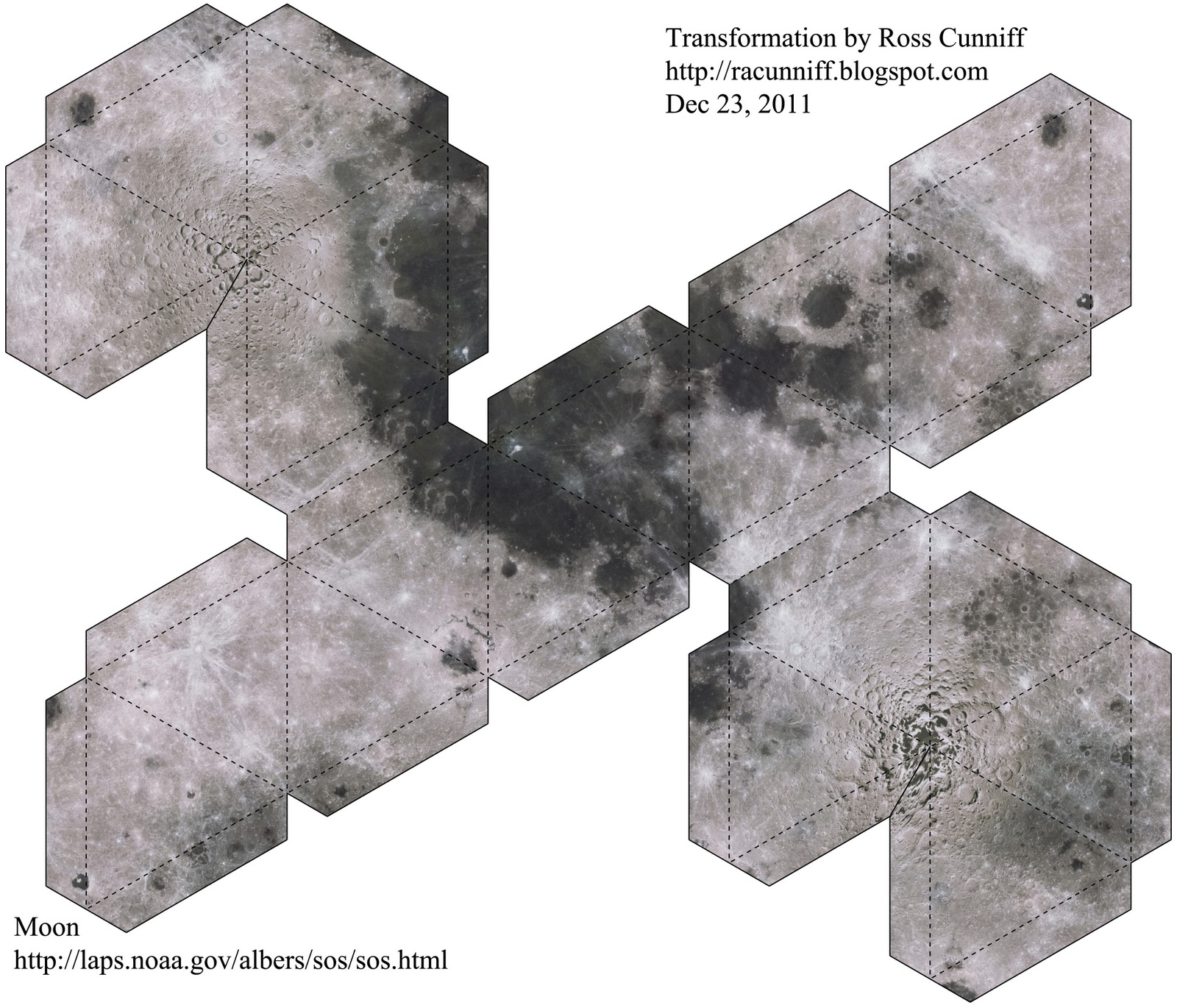 Ross already had corrected cylindrical projections to work with. Had he had just individual images of small areas of the planets to work with, the task would have been much more difficult, as the images would have needed to be georeferenced with respect to the surface of the planet.

For maps of Earth, georeferencing generally requires the use of known latitudes and longitudes for reference points. These reference points are often listed in gazetteers, such as GNIS. Modern maps tend to include information about the coordinate system and projection used, which makes georeferencing them more straightforward: input one reference point (often listed in the map legend) and the projection, and you’re good to go. For older maps, you need to find multiple reference points to correct for the type of projection used, which you may or may not know (and even if you know it in theory, it might not be correct in the actual map you’re working with). Note: This overview is highly simplified; if you want to know more, I have listed some resources below.

Digitization projects usually use either GIS or Google Earth KML for georeferencing. If you most want a pretty display for end-users, Google Earth integration is generally faster and cheaper. If you want a system for researchers, then GIS tends to be preferred (though GIS data can be converted to and extracted from KML with various tools). The British Library’s project uses the Georeferencer product from Klokan Technologies, also available in an open-source version. Users compare two maps, clicking on reference features in first one map which has already been georeferenced and then in the historic digitized map. When enough common features have been identified, the map is saved and a 3D projection is available in Google Earth.

I am an independent digital collections and library technology consultant in Austin, TX.